A brief history of Timbeter detection

Timbeter was founded in 2013 (under the name of Timber Diameter) and the first downloadable app was released in 2014. At its launch, it didn’t have any automatic log detection capabilities, instead, the user had to manually draw the contour of the pile. However, work began to automate this process plus provide users with log by log measurement possibilities.

Automatic detection has turned out to be harder than initially conceived. Early variants of the detector found only the best looking logs and had a strong tendency to “hallucinate” up logs that didn’t exist. Later, major improvements were made in areas, including:

Detection now vs three years ago

In the following, several (mostly difficult) images have been taken and detections were created from the following stages of development:

See from the following animations how the log detection has improved. Each detection is shown for 5 seconds.

As you can see, hard work has paid off and the log detection has improved significantly. But this is just the beginning as the team are constantly feeding new measurements into the machine learning process to be able to detect logs even in the most difficult conditions.

Did you try Timbeter a long time ago? Try again and we guarantee you more precise results!

The implementation of new technologies in your daily... 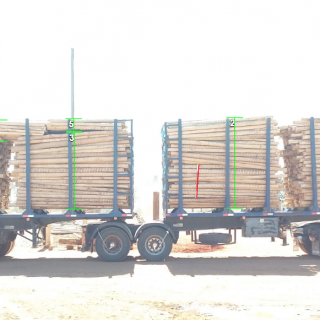 Measuring logs loaded on trucks is a challenging...